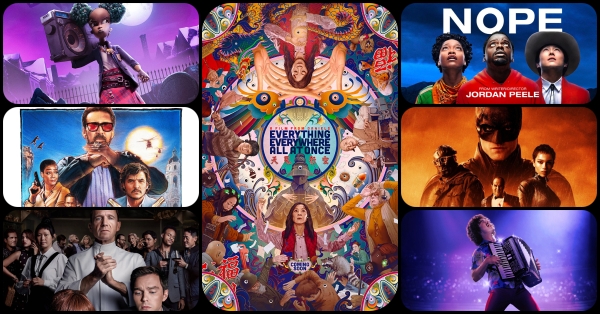 We still have to see how it will stand the test of time, but 2022 has been a great movie year, and it feels like the movies are rebounding from the pandemic. I will never not champion the movie-going experience, and here are my favourites from the past year in cinema. Individual achievements to follow.

Everything Everywhere All At Once

Few films are ever able to surpass high expectations, but this one exceeded and succeeded. From the moment I saw the trailer and took note of the cast, I knew I was going to be in for a treat, but I had no idea precisely the spectacle The Daniels had in store for us. We’re treated to this beautifully rich adventure that is as bombastic as it is ambitious, as poignant as it is hilarious. Each member of the cast is outstanding in their own right, but almost make a point to let the audience know it’s a team effort. Michelle Yeoh as Evelyn is superb and there’s no denying that, but to bring Evelyn to life, she needs Ke Huy Quan and Stephanie Hsu and Jamie Lee Curtis. And they all understand this so perfectly that everything works so in sync. It’s as close to a perfect film that 2022 saw.

The Banshees of Inisherin

Almost serving as counter-programming to Everything Everywhere All At Once, this one leans into the careful and quiet. Colin Farrell delivers a career-best performance, in a career filled with quality, underrated performances. Ultimately I had no idea how to approach my thoughts on this. It’s comedic, it’s dark, it’s oddly optimistic, but incredibly depressing. It’s about the friendships we have and the impact they have on the self. It manages to be about so much of everything, but never once feels scattered or gluttonous or indulgent. It very much feels like filmed therapy session, where you just run through everything, it all connects and makes sense, and you feel a sense of relief on the other side, despite everything you just went through. And that’s something only the trio of Farrell, Brendan Gleeson, and Martin McDonagh could bring us.

I think the best thing Rian Johnson did for Glass Onion was to not feel the need to one-up Knives Out. He just sets out to deliver a twisty, turny murder mystery with a wild cast of even wilder characters. Daniel Craig feels at home inhabiting Benoit Blanc, and is now having fun in this world he and Johnson are building together. It would be easy to parse through and examine the precient commentary various media personalities this COULD be about, but even leaving certain hyper-specific allegories aside, it’s still a general critique of the trend of hoisting these particular personalities onto a pedestal. And then puts it all through a super fun murder mystery that keeps you on the edge until the very end.

Much in the same way the chef prepares his food, the film is precise in its presentation. Director Mark Mylod is very careful to keep you on the edge of your seat from the get-go, but never tips his hand, even leading up to the final moments. Ralph Fiennes is magnificently intimidating as Chef Slowik. His presence looming over the proceedings, installing this slow, creeping sense of dread. His claps gain power and control over the restaurant with each passing course. Anya Taylor-Joy always brings confidence to every scene. Even when Margot is as lost and scared as everyone else, there’s still a hint of knowing in her demeanor. The supporting cast is great with Nicholas Hoult and Hong Chau for delivering superb and uniquely unsettling performances.

I’ll admit it, I’m a Jordan Peele fanboy, and will generally follow wherever he leads. His examination of spectacle, and the human need for it, is surprisingly poignant. His meta-commentary never feels trite or contrived. He’s fully aware of what he’s doing and where he’s trying to lead the audience, but never does it with a wink and a nod. I think Nope is his most polished and aggressive film yet, with exciting performances from Keke Palmer, Steven Yeun and Daniel Kaluuya. This one definitely takes a second watch for it to fully sink in, but it’s worth that second watch.

The Unbearable Weight of Massive Talent

This could have gone two ways, and it broke the way of being surprisingly fun. Never tries for greatness, but always stays entertaining.