This post includes in depth discussions of the plots for both Fight Club and Hannah Montana. Spoiler Alert would be an understatement. If you haven’t seen them yet, and subsequently don’t want them ruined for you, I recommend you don’t read this. Otherwise… enjoy.

Now, Fight Club is one of my all time, top 20 favourite movies. It was #20. It’s a film about a great many things, tackling a great many topics. White rage. Male aggression. Yuppie backlash. But ultimately, it’s about Multiple Personality Disorder. At least, for the purpose of this post, that’s what it’s about.

Edward Norton’s character, which had no name, but we’ll refer to as Jack from here on out, was an unhappy, bored, single, young urban professional. He wasn’t all that impressive. Jack suffered from insomnia, which led him to seek comfort in the misfortune of others by attending support groups for various diseases.

In his mind, he creates the perfect vision of the man he wishes he could be, in Tyler Durden (Brad Pitt). Tyler even goes so far as to say to Jack – “All the ways you wish you could be, that’s me. I look like you wanna look, I f**k like you wanna f**k, I am smart, capable, and most importantly, I am free in all the ways that you are not.”

Jack didn’t like his life, so he created another one.

Hannah Montana does not exist. She is not a real person. She is a fabrication of Miley Stewart’s (Miley Cyrus) mind so she can effectively have a career as a pop star (Hannah) and have a normal life as a normal teenage girl (Miley).

Miley is a normal, teenage girl from small town Tennessee. She’s nervous about the normal teenage girl things. Going to the dance. Learning to drive. Puberty. Being popular. The new Justin Timberlake album. Her friends. Does the cute football player like her? Normal teenage girl stuff.

Hannah is one of the biggest popstars in the world. Thousands upon thousands of people adore her. Stores and boutiques are falling over themselves to have her shop at their store. Celebrities want to hang out with her. She’s confident.

When Tyler and Jack are together, only one is addressed by a third party. Only one interacts with said third party.

The primary difference is that the people in Miley’s life are enablers. For Jack, no one knew about his delusions. They figured there was something going on, but they didn’t know. For Miley, they not only know, but they play along.

Hannah is Tyler. Miley is Jack. 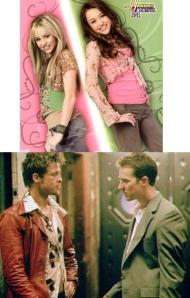 One thought on “The Hannah Montana/Fight Club Theory”