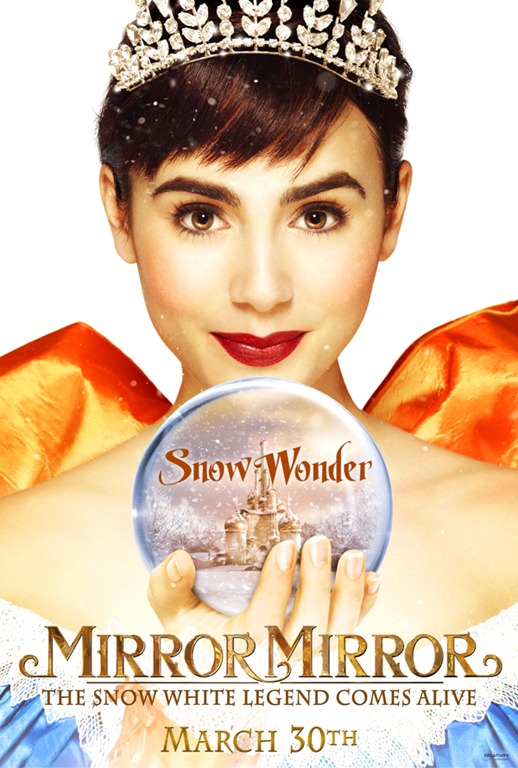 Fairy tales, particularly Snow White have become a new hot thing. Grimm on NBC, Once Upon A Time on ABC, another Snow White film out in June and a few Beauty & The Beast projects in the works.  Mirror Mirror gets the jump on the cinematic offerings with Indian director Tarsem Singh’s take on the classic story.

Singh’s got an interesting eye. His films have a unique visual style that’s aesthetically pleasing and immersive. I really enjoyed his 2000 debut, The Cell, and 2006’s The Fall. This film is just as enjoyable, with a fun quirkiness that doesn’t feel insulting to the source material, or the audience.

What I liked most about the first Shrek film is its ability blend in modern jokes with the medieval back drop. In that respect, Mirror Mirror is a live action Shrek, though not as unrelenting with the wink & nod.

The relatively green Lily Collins is absolutely engaging as Snow White, perfectly capturing the wide-eyed innocence and optimism, and balancing that with the she-warrior the character becomes to battle the Evil Queen. Already, I can tell I enjoy her performance more than Kristen Stewart’s blank reading of lines in June’s Snow White and the Huntsman. Collins is just so sweet.

I quite enjoyed Julia Roberts tapping into her sinister side for the Evil Queen. It’s a side of her we haven’t really seen before, and there’s a delightful campiness to it. Armie Hammer is charismatic and wonderfully witty as Prince Alcott.

Unfortunately, no matter how visually pleasing the film is, nor how entertainingly funny the actors performances are, the film never quite reaches the level of being “Must See.” It’s a good piece of cinematic fluff, but is ultimately forgettable. Though I am hoping it gives both Hammer and Collins a push towards more solid work. Do see it if you’re so inclined, but you’ll be OK to wait to check it out as a rental.

Wrath of the Titans

Ahhhh unnecessary sequels. I didn’t particularly care for the first one. It was passable, but underwhelming, and the 3D was terrible. It was one of the last films I elected to see in 3D. That was general consensus 2 years ago, so naturally they made a sequel.

I have nothing against Sam Worthington, he’s a perfectly capable actor, but it doesn’t seem like the push to make him the next big thing will come to fruition. I just don’t buy him as Perseus, the half-god, half-human son of Zeus. I don’t know what it is, but he just doesn’t have that spark.

Wrath ends up being a complete waste of everyone’s talents. There isn’t a single member of the principle cast whose work I don’t enjoy, especially the prestige British actors. I suppose even they must have blemishes on their filmographies, and they can’t always do the important stuff. Big budget pays out big, too. It’s just… It was an exercise in wasting time.

The most confounding performance was Bill Nighy. I honestly didn’t think it would have been possible for him to retread his Davy Jones from Pirates of the Caribbean, but the mannerisms are quite similar, to the point that I think he didn’t even bother coming up with a new way of playing Hephaestus because he knew that this movie was going to pass mostly unseen. I will give major kudos to Edgar Ramirez for being a total badass Ares, and in a better film he would have been more exciting.

The film is a loud display of action sequences and fight scenes with not enough meat on its bones to make it worthwhile. I wouldn’t even recommend waiting for the rental. It’s completely skipable.