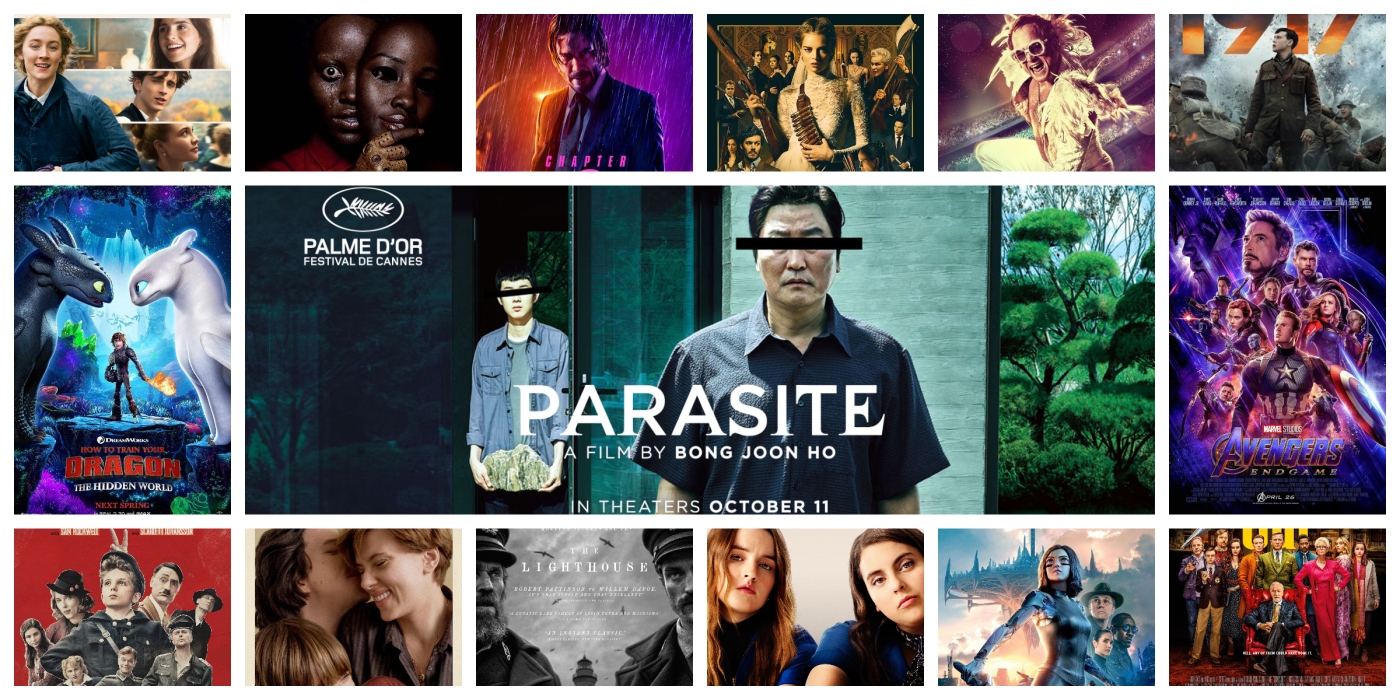 Best Films of the Year

This was the final entry into the list, the last I saw, but I was blown away with how perfect this film is. Bong Joon-Ho has long made interesting think pieces on class disparity, including past Top 10 entries Snowpiercer and Okja, but they haven’t so finely put a bow on it. And to his credit, he never marks a villain or hero in the story, so as not to demonize or lionize one particular class or the other. Bong Joon-Ho expertly crafts his story by attacking the systemic nature of disparity, as opposed to the unwilling participants. We feel for all involved, especially for the tragedy of the Kim family. The film is masterfully edited and brilliantly paced to pull you right in, and while it’s an ensemble piece, Song Kang-ho’s performance as Ki-taek is one of the more careful and nuanced performances of the year, bringing great heart and woe to the Kim patriarch.

Rian Johnson knows how to craft a film. He knows how to put it together to make that film work. And he really gets all the pieces to work for Knives Out. Much like Parasite, Knives Out takes a look relevant look at societal class structures and a sense of entitlement, but with a decidedly less dark ending. Depending on your point of view, that is. Another top-notch ensemble cast Hollywood superstars, including Chris Evans in his first post-MCU role, taking delight in playing against type as an anti-Captain America, and enjoying every minute of it. The movie is sharply written and directed, and just pure joy to consume from start to finish.

That scene… THAT scene would qualify Marriage Story for top 10 status alone. It’s beautifully shot, tightly written and edited, and perfectly acted by Adam Driver and Scarlett Johannssen. That 10 minute scene is a masterclass of filmmaking. But you can’t judge the whole of a film based on just a 10 minute sequence. Fortunately the entirety of the film from the opening scene with voiceover montaged introductions to our family, to the closing moments are a beautifully executed examination of what leads to divorce, and what divorce means to the parties involved. It doesn’t shake fists or point fingers. It doesn’t condemn. It exists as a cinematic therapy session. It connects to things deep down in the viewer’s psyche it may not know are there. And it all fits.

For what it’s worth, I walked in expecting this to be good. It seemed like an easy film to like. A great cast, an amazing emerging writer/director, a classic novel, I was ready to like it, not love it. But I liken this to a great cover song. It takes the familiar bits we know and love. Then adds in the artist’s own personality and mentality, and out pours this wholly new thing for us to appreciate and love and enjoy. It applies modern sensibilities in feminism to the ahead of its time sensibilities of feminism of the source material. It makes this 150 year old novel entirely relevant and important and contemporary again. And by gods it made Amy March likable. Greta Gerwig deserved an Oscar nomination, and Florence Pugh deserved every ounce of hers.

Endgame is impressive in its scope. Especially paired with its direct predecessor, Infinity War. A decade’s worth of storytelling culminating in an ambitious cinematic project. I saw this one opening night, surrounded by fans who had been with it since day one as I had, and we laughed, we cheered, we cried, we gasped, we laughed some more. That’s the power of cinema. To tell these amazing stories of gods and heroes, and make them just as human as you or I. I know it’s not everyone’s cup of tea, but I’m an unabashed genre nerd, and with something this epic, I can’t help but enjoy the experience.

Worst Films of the Year

Joker is fake deep by examining a broken man, but offering no insight into his psyche. It casually mentions societal problems without any nuance or offering up any solutions. And Todd Phillips just wanders through Martin Scorsese’s greatest hits without putting his own voice or vision to the film. The film is a bland borrower who doesn’t even have the good sense to change any of the answers after copying off of better films. Phoenix’s performance is the films sole saving grace, but that’s not enough to pull it out of the disappointing banality of it all.

Jumanji: Welcome to the Jungle Award for Most Surprisingly Good Film

Ready or Not has all the same things to say about class disparity as any of the top films of the year, it just doesn’t package it in subtlety or metaphors. It hits you over the head with it, with gleeful delight. Where Parasite, Knives Out or Us took a careful surgeon’s hand to the topic, Ready or Not comes in swinging an ax chopping everything in its way. Samara Weaving’s Grace is a perfect horror hero, with her guttural screams morphing from fear and anguish to a bellowing war cry by film’s end. In an age of prestige horror (which I love, don’t get me wrong.), a gleefully dark and blood B-horror is greatly welcome.

Best of the Rest