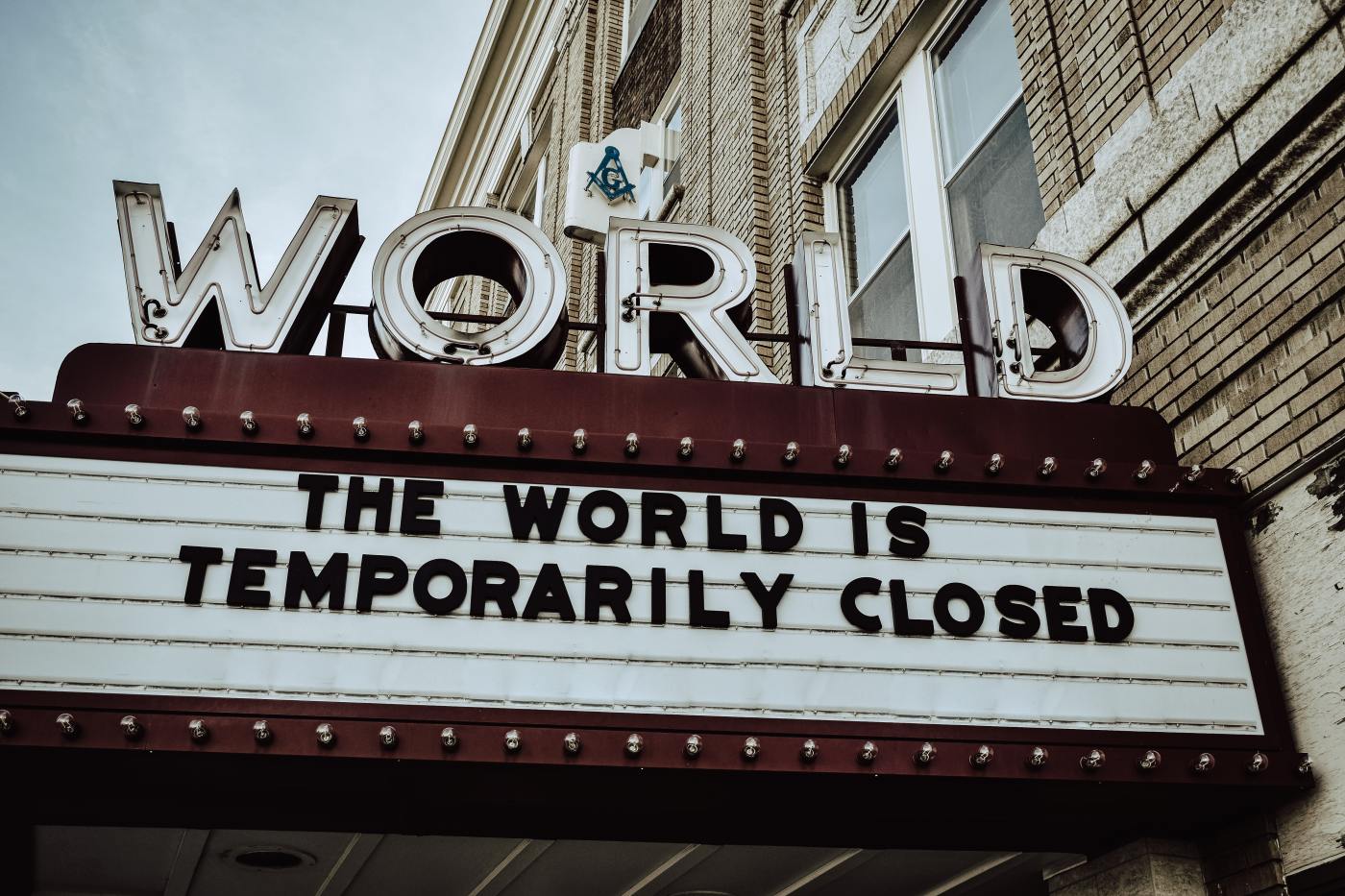 No Time To Die, A Quiet Place II, Mulan, Fast & Furious 9 and New Mutants were among the first high-profile movie release delays in the fallout of the pandemic. AMC Theatres, Regal Cinemas, Landmark, Cineplex, and Alamo Drafthouse among others announced they would be closed for at least 12 weeks, and now they’ve slowly begun to reopen, raising a lot of eyebrows in the process. Regal is closing down indefinitely. And movies keep getting pushed back on the release calendar, with the only major theatrical films left in 2020 being Death on The Nile and Wonder Woman 1984, both in December (maybe, probably not).

Movie theatres and production companies are going to take a serious hit, losing the spring and summer movie seasons, and now the fall and holiday seasons. But how can they fix this problem now, and how can they proceed going forward in a post-pandemic era? Fortunately, they’re already starting to cope with the box office hit they’ll take, and they’ll just have to keep adjusting and adapting into the new distribution model.

Warner Brothers announced it would send its then recent releases to VOD early, including Birds of Prey, as did Universal Studios with Trolls: World Tour and The Invisible Man. Both studios have since launched streaming services in HBO-Max and Peacock, similar to Walt Disney’s Disney+ and Hulu (currently co-owned with Comcast/NBCUniversal). The recently re-merged CBS/Viacom/Paramount have announced a streaming platform built on top of their existing CBS All Access, but that’s still several months off.

With the 2020 movie calendar having been effectively shut down, and the future of movie releases fundamentally altered, studios and the National Association of Theatre Owners need to strongly reconsider the stalled out proposal that was “The Screening Room.”

The problem with the service was the device itself was $150, and then it was $50 per movie, and you don’t get to keep the movie. It’s a two day rental. No regular, average human could or would pay that, and very rightfully, that plan died on the vine.

But the past several months have taught us there was something to it. The closures and pandemic has shown audiences they can have a great movie experience at home, and studios/artists that they can still thrive in the modern era by working with instead of against streaming. So while maybe they shouldn’t reconsider the Screening Room specifically, that model can be adapted to the studios current platforms, and be made more economically viable for both the studios and the consumer.

Universal made more off of Trolls: World Tour‘s VOD release than it did with the original Trolls film. Disney is being shy with the figures, but reports are saying 29% of Disney+ subscribers paid the $30 Premier Access fee for Mulan. Hulu’s Palm Springs broke the services opening weekend streaming records. Tenet probably would have done better for Warner Brothers had they been able to have a proper release for it, which would have included a home option. I still don’t know why they haven’t jumped on that yet.

I don’t think the movie going experience, the theatrical experience, as we knew it up through March 15th, 2020, will survive. While I understand certain films will pack the house, seeing on average 60 films per year means most of those are in mostly empty theatres. Movie theatre attendance has been dwindling for the past two decades, pre-pandemic, so the pandemic didn’t do anything but speed up the inevitable. People still turn-out for Marvel and Star Wars and animated films.

I don’t think you’re going to get families to show-up anymore. If the family can make the choice between arduous task of getting the kids to the theatre, then tickets and snacks, and keeping an eye on them in the theatre, and bathroom breaks OR just paying $20 to watch it at home, with all the snacks you have at home, the ability to pause the movie… no contest. The family will stay home.

In that term paper I wrote about the movie going experience, I wrote, based on research, that for the movie going experience to survive, the theatre industry would have to offer something beyond a big screen, great sound, and a big tub of popcorn. The theatres that have moved in the direction of bar service, gourmet concessions, even subscription services like AMC and Regal were doing, were seeing gains in attendance.

Fathom Events, which hosts anniversary screenings of classic films as well stage shows and operas in theatres, was technically one of the top 10 film distributors in the country in 2018. Throughout the lockdown, we were routinely seeing classic films top the box office because of drive-in theatres. Personally, I’ve seen several classic films on event re-releases. But I’m also a movie nerd who just goes to movies all willy-nilly, so my anecdotal evidence means nothing.

With studios investing in streaming and VOD alternatives, with theatres needing to go more niche… the movie going experience is dead. Long live the movie going experience. The $20-$30 per movie isn’t quite the sustainable model. I know the studios would like it to be, but it’s not. I know Disney+ got 10 million subscribers to $30 for Mulan, but not every movie is Mulan. They probably could have gotten 20 million subscribers to go for $20. I was happy to pay $25 for Bill & Ted Face the Music. But I think $25 is the max, $20 sweet spot, especially if it’s ours to keep. $15 for a digital rental is the max.

Even Universal is seeing this by partnering with AMC to narrow the home-release window from three months down to three weeks. Even though theatres start seeing money later in a movie’s theatrical run, they aren’t seeing much because unless it’s had a Stan Lee cameo or was directed by James Cameron, there haven’t been too many films with long enough box office legs to carry mass appeal past week number four.

My hope is movie theatres will still thrive by shifting their business model. They don’t have go luxury, but they’ll have to go gourmet. Comfortable seating, premium projectors and sound systems, deluxe concessions, even so far as dinner and a movie in one spot, much in the way some have already done, like the Alamo Drafthouse or certain AMCs (speaking specifically of familiar brands, I’m certain there are others). Offering event showings, and ticket subscriptions. Gone are the days of walking up to the generic box office and getting one ticket, a soda and a popcorn, and seeing whatever’s new. They’ll have to provide more than what the people can get at home in order to get people to not watch at home.

Movie theatres won’t be the entertainment staple they once were. We won’t study and analyze the theatrical box office return every Sunday night/Monday morning. But they’ll still serve a purpose for the truly devoted. But casual theatre attendees won’t be turning out. Because the theatre will have to be a destination, instead of just another place.

And I think we’ll see an investment in and perfection of the home release model. For the random odd movie here or there, the $25-$30 price tag is fine, but if they’re going to seriously make the jump to home streaming releases, that price point can’t last. Surely they’ll see that 20 million at $15 is better than five million at $30. One could hope they would.

Weighing those options of Streaming (free with subscription), VOD (additional charge) or Theatrical release, could lead to a better vetting of how the studios allocate fundings, and this could prove to be a boon for smaller voices, for minority artists. Pre-pandemic, Netflix was providing its platform to voices and artists not normally seen or heard from the major studios with theatrical distribution. I think the studios will start to better invest in smaller features, minority voices, and even more unique or interesting projects, rather than playing it safe. And as both Netflix and Hulu have proved over the years, certainly this past year, streaming can be viable platforms for smaller films to not have to compete with big films.

As much as I stream, I’ll still go to the theatre. Keeping that experience alive for as long as I can.