Like most film buffs, I awoke yesterday morning at the crack of  8am when my alarm went off, shuffled around, did my morning routine, got my coffee on, ate a yogurt (part of my New Years Resolution to be more like Michael Westen) caught the end of the Saved By The Bell episode when Zack accidentally knocks over Screech’s parents’ bust of Elvis, then gambles away Screech’s dog… not the best episode, but OK. And THEN, at 8:30, I turned to the Oscar nomination announcement ceremony.

My take is one of watching from the sidelines, having not seen all of the nominated films, nor even all of the Best Picture nominees (will be at 8 of 10 this weekend), but being a fan of not only film as an art, but the Oscars as a celebration of the art, I want to chime in, have my say.

I’m going to focus on the Big 5 (Picture, Director Writing, Actor, Actress, and technically 6, since there are 2 writing categories) & the supporting role categories, because I’d be lost trying to dissect “Best Documentary – Short Subject.”

As for locking in my predictions, that will happen a week before the ceremony on February 27th.

Best Writing, Screenplay Based on Material Previously Produced or Published

It’s interesting that Toy Story 3 got the nod for adapted screenplay, as it, according to the rule, is based on the screenplay for the 95 original. I don’t see it, but hey, I don’t make the rules, or nominate films. But looking at the list, I’d say Toy Story 3 is the only serious contender to upset Aaron Sorkin’s brilliant script for The Social Network.

Another Year; The Fighter; Inception; The Kids Are All Right; The King’s Speech

This is a category that’s just wide open. All the scripts are just so different, with their own merits and nuances. But ultimately, it’s a three-way race between the heavy family drama of The Fighter, the sometimes comedic character study of The King’s Speech, or the intricacies of Inception.

Best Performance by an Actress in a Supporting Role

As with most of the major categories, there were snubs. And as with most of the major categories, the field just became too crowded to fit them all. Who would you swap, and why? Personally, the two biggest snubs for Supporting Actress are Mila Kunis in Black Swan, who keeps pace with Natalie Portman (who did get a nomination) and Chloe Moretz in Kick Ass who  exhibited a reckless bravado that blindsides you when you realize that she was (at the time of filming), in fact, a mere 11 years old. But who do you kick out? Steinfeld, who showcased a calm intensity against Bridges & Damon? Weaver? Bonham Carter?

Best Performance by an Actor in a Supporting Role

Christian Bale for The Fighter; John Hawkes for Winter’s Bone; Jeremy Renner for The Town; Mark Ruffalo for The Kids are All Right; Geoffrey Rush for The King’s Speech

This one was a much less crowded field, only if you discount just about everyone from The Social Network. It seems almost criminal to have left out Andrew Garfield or Armie Hammer and, to a lesser extent, even Justin Timberlake. But like the Supp. Actress category… who would take out? Renner? It seems more criminal that he’s the lone nomination for the superb The Town. Ruffalo?

Best Performance by an Actress in a Leading Role

This is another crowded category (which is surprisingly unusual) where you could bemoan the snubs, but who would you take out. The biggest snub I’m hearing is Julianne Moore instead of Annette Bening for The Kids Are All Right. I’ll reserve my judgement after I see it this weekend. I’m also disappointed in, again, no love for Chloe Moretz, this time for her raw, emotional and entirely beautiful performance in Let Me In, achieving emotional highs that elude actresses more than double her age and experience. Ultimately, this category belongs to Natalie Portman.

Best Performance by an Actor in a Leading Role

Lead Actor will essentially come right down to the wire. Firth is the heavy favourite, coming into this with two previous nominations and a multiple wins for this role, but I think newcomer Eisenberg will be the spoiler. The Social Network is a strong contender in all categories, and Eisenberg breathed life into not only the character (or, caricature? perhaps) of Mark Zuckerberg, and the story of Facebook. But Bridges and Bardem are previous winners, and Franco could also prove to be a viable dark horse. Perhaps the biggest acting snub belongs to this category with the absence of Mark Wahlberg, considering The Fighter picked up nominations everywhere else. But, yet again, the slogan for this year’s Oscars is “Who would you bump?”

This boasts a stellar, and interestingly diverse cast of characters, who all have their own distinct style. Unfortunately, this also contains a major snub, and the “Who would you bump?” question is easier to answer. As much as it pains me to say this, as I’m a huge fan of their work, I’d drop the Coen Brothers in favour of the more finely orchestrated work of Christopher Nolan on Inception.

Best Motion Picture of the Year 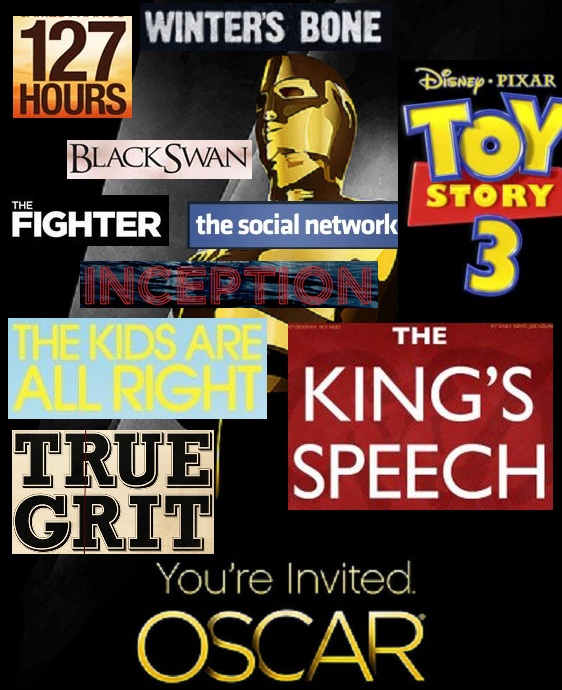 Last year, the Academy started to experiment with expanding the Best Picture category to 10 nominees, in a bid to bridge the gap between audiences and voting members, and to a degree it worked. And I think we’re slowly seeing a trickle down that could, over time, open up the other categories to “non-traditional” Academy movies. The race is still wide open, with no clear front-runner. The Social Network is the heavy favourite for this category, but The King’s Speech is gaining momentum, with The Fighter and Black Swan also on track to be spoilers, and you can’t, of course, count out the great Toy Story 3.